The waters of ancient Scotland were dangerous.

Sailors could be assaulted by a sudden storm. Kids would get caught by a rip tide. And raiders were never far from the horizon.

But what some feared more than anything were the legendary water beasts.

The Loch Ness Monster is famous world-wide; but by no means was it the only terrible creature.

So, here’s everything you need to know about Scotland’s lesser-known water monsters. 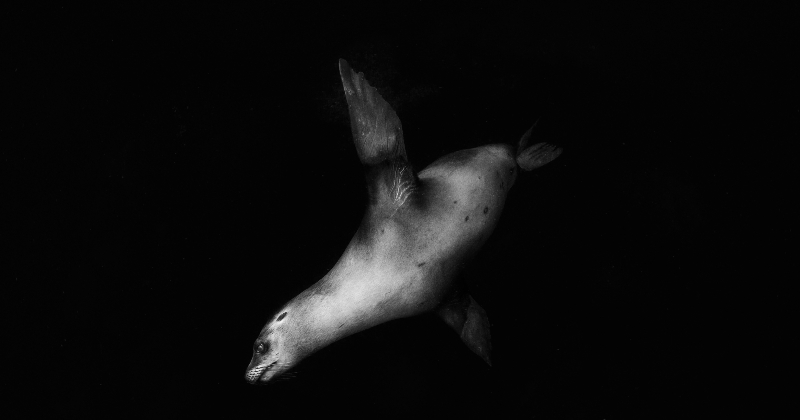 The Selkies were shapeshifting seals found around Scotland’s northern and western isles.

They could slip off their supple skins and transform into a beautiful and alluring human. People who met them in human form would fall madly in love. Often the selkie would stay with the human, but there’d never be a happy ending.

This is a typical selkie story.

A legend from Shetland tells of a selkie woman who had been married to her mortal husband for many years. They’d even had children with webbed feet and hands.

Although the selkie woman loved her children, she was desperate to return to the sea.

Her husband was aware of his wife’s tragic desire. So he’d hid her seal skin.

Most days she’d be loving, kind, and beautiful. But sometimes her face would turn dark and twisted and she’d shout at her family, “where is it!? I need it! I want it now!”.

The years passed; and one day, her son found a beautiful seal skin while out playing. He loved his mom dearly, so he brought it to his mother and said “here, I found what you have been crying for”.

Her face lit up in delight; and without even shedding a tear for the family, she grabbed the skin, put it on, and slipped into the water.

She left behind her home and her husband and children. The husband knew now never to fall in love with strangers from the sea.

The Origins of the Myth

So rather than eat you or take you to a watery grave, these creatures just break your heart.

But where did this myth come from? Is there an inkling of truth in this legend?

Well, many seafaring people from further north than Scotland did wear seal skin. In particular, Sea Sami people from Norway and Sweden could have come over to Scotland. In their semi-submerged kayaks, they may have looked like strange sea animals coming from the sea. And perhaps when they visited Scotland, they did fall in love with it for a while. But they had their own homes that they’d eventually miss and wanted to travel back to. 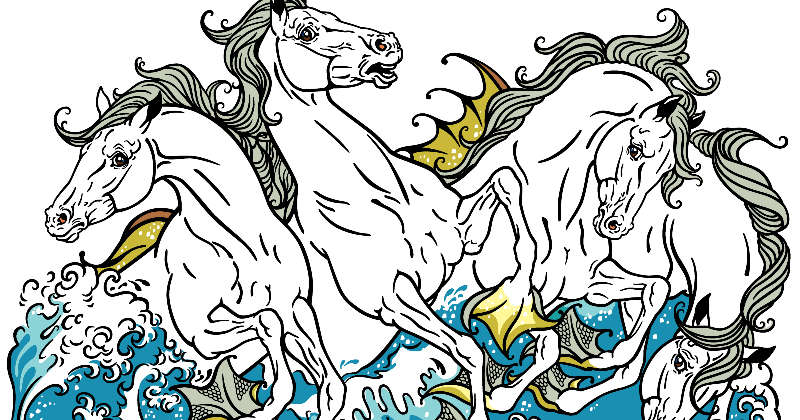 Now it’s time to stop to imagine falling in love on the shores of Scotland, because we’re going to tell you about a more fearsome Scottish water beast. One you could never love. The famous Kelpie.

Kelpies were among the most malicious and dangerous of all the supernatural Scottish creatures.

The Kelpie is a water spirit that’s found in a river, burn or loch. They’re known to prey on unsuspecting travellers.

Once it’s found its prey, the Kelpie demon leaves its watery home and transforms into a beautiful, tame white horse. They’ll parade in front of you, teasing you with its kind and gentle nature.

And who is strong enough to resist a ride on such a fair animal?

But once you’re decided to jump on this horse’s back, its sticky magical hide grips onto you. It’s impossible to disembark.

The Kelpie will then bolt to the water, dragging you down with it to be drowned and devoured.

One of the scariest stories about kelpies happened a long time ago in Aberfeldy.

A group of eight children were playing by the river when they saw a beautiful white pony. It seemed tame and friendly, so one after another, the children climbed onto its back. The last child due to mount was more cautious.  He saw something weird that stopped him in his tracks. He saw something strange about the pony that made his blood run cold.

The horse’s back had grown longer every time a child had climbed up onto it. The boy screamed in alarm and ran to hide.

The Kelpie let out an evil “neigh” and dashed toward the river. The seven screaming and terrified children were unable to get off its back and were drowned and devoured in the loch. So next time you’re strolling by a pretty river or a beautiful loch, be careful; you may be watched from the water by a hungry Kelpie.

But don’t you worry about this too much these days. They say the kelpie stories were used to stop children playing in the lochs and thieves stealing horses. So by all means go for a swim in the clean waters, just don’t go stealing horses please! 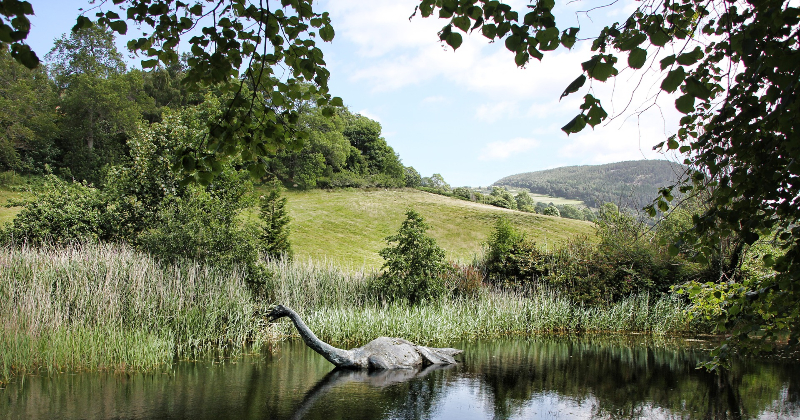 There’s another legendary creature who doesn’t plot to kill you like vicious kelpies. But seeing her is a bad omen.

Morag, the second most famous loch monster is more of a recluse who lives in remote Loch Morar. The loch is the deepest in the British Isles, so its cold waters have been a comfortable home to the beast for many decades.

We’re not really sure what Morag looks like. Old stories gathered from people living near the loch described her as a mermaid. Beautiful, with long-flowing yellow hair and lovely curves; Morag was very timid.

Seeing her, though, meant a death in the family or that a local clan fell in battle. When that happened Morag would rush about with great speed and wail in distress, weeping over the loss. Her crying would sometimes be so mournful, it would make the local men and women weep with her.

With passing time, the stories of Morag changed a lot, and the recent sightings describe a humped serpent-like creature similar to Nessie.

In 1969, two men were out fishing on the loch when they accidentally bumped into the monster in their boat. Enraged Morag tried to attack them, but the men hit her with an oar and attempted to shoot her with a rifle. The creature was quick though and disappeared into the depths of the loch.

The last sighting was in 2013, when two holiday makers saw a large black shape in the water three times over two days! This time though, no one disturbed the creature.

As always with monsters, there are as many believers as sceptics. So, if you’re planning to visit Loch Morar, keep your phone and camera charged and your mind open. 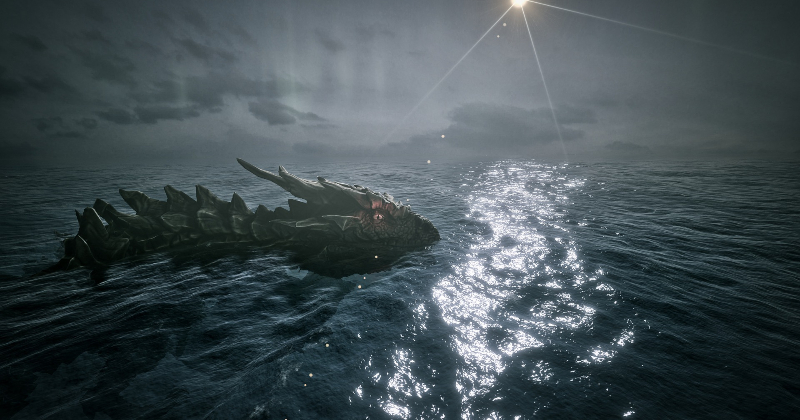 A long time ago, a malevolent spirit created a vicious sea serpent called the Mester Stoor Worm and placed it in the cold waters in the North.

The monster was a terrible sight to behold. It could crush boats like eggshells, its breath was poisonous, and its forked tongue could sweep entire cities into its maw. Wherever it appeared, it tormented the local people and wreaked havoc and destruction. Poor people in one of the ancient kingdoms suffered a lot from Mester Stoor Worm, but a day came when a hero slayed the beast.

The Tale of Assipattle and Mester Stoor Worm

One day, an evil beast arrived at the shores of an ancient kingdom: Mester Stoor Worm, the king of all sea monsters.

The poor ruler didn’t know how to appease the creature and consulted a wizard on what to do. The wizard said, “To keep Stoor Worm from destroying towns and villages, offer him seven virgins as a meal”. And so, every seventh day of the week at dawn, the hungry creature devoured poor girls. But that wasn’t enough, Stoor Worm would not leave and still attacked the settlements.

The desperate King consulted the wizard again and regretted it straight away. The only way to truly get rid of the sea dragon was to sacrifice the fairest maiden in the kingdom, the King’s daughter.

The King cried bitterly and asked for another solution, but he only got a ten-week reprieve. So, the King sent couriers across the land with a message that the hero who could slay the dragon would receive the kingdom and his legendary sword, Sikkersnapper.

Many gallant warriors accepted the challenge but either ran away after seeing Stoor Worm or died. The fate of the princess was almost sealed until an unlikely hero arrived on the last day.

The boy was called Assipattle which meant ‘the Cinder Lad’. He got into his small boat, armed only with a bucket of smouldering peat from his hearth. He snuck up on Stoor Worm, but it was the dawn of the seventh day of the week and the monster started to yawn and wake up. Each yawn sucked in a vast tide of water into the beast’s maw and Assipattle and his boat were swallowed up.

When the boat landed in the stomach, Assipattle grabbed his bucket and ran for his life. After what felt like an eternity; he reached the creature’s liver, cut it open, and shoved in the bucket. The boy quickly rekindled the fire and ran away before the flames spread into the liver.

Asspitattle rushed back to his boat and waited until Stoor Worm felt what was amiss. When the monster felt the pain in his entrails, he started to retch. Assipattle clung tight to his boat as the water from the creature’s stomach rushed to the mouth. With a spray of water, the beast spat out our hero and started to burn.

Safe on the shore, Assipattle watched how the injured sea serpent shot its tongue and grasped hold of one of the horns of the moon. But the beast was getting weak, so the tongue slipped and fell with such a force that it made a rift in the earth. The waves rushed in with a roar creating the Baltic Sea.

Stoor Worm thrashed in agony, and with each throw his fangs fell out from its mouth. The first couple created the Orkney Isles, the second lot became the Shetland Isles, and the last formed the Faroe Isles. Before the beast took its last breath, it curled up tightly and its body created the land called Iceland.

And so Assipattle liberated people from the terror of the sea dragon. The King called him his heir and married him to the princess. Assipattle grew into a wise king and his rule was full of prosperity for his people.

The Origins of the Myth

The tale of Stoor Worm is an Orcadian story which was inspired by Viking lore. Long, long time ago those ancient seafaring people settled in Orkney, Shetland, Hebrides, and part of the mainland Scotland called Caithness. They sailed in boats adorned with heads of sea monsters and brought bards telling tales of dragons.

The name Stoor Worm could come from the Old Norse word Storðar-gandr which is another name for Loki’s son, Jörmungandr, or the Midgard Serpent. This terrifying monster grew so huge it encircled the whole world. Who knows, if it hadn’t been for Assipattle, Stoor Worm could have ended up the same size and the Northern Islands and Iceland would not exist.

So there it is, a list of lesser-known water monsters to ignite your imagination. Whether you believe in these mysterious creatures or not, remember to treat our waters with respect. And leave no traces of your visit, so the next generations can come monster-spotting as well.

The Story of Bibury and the Yellow Car
Rabbie

A Short History of Cumbernauld
Dave